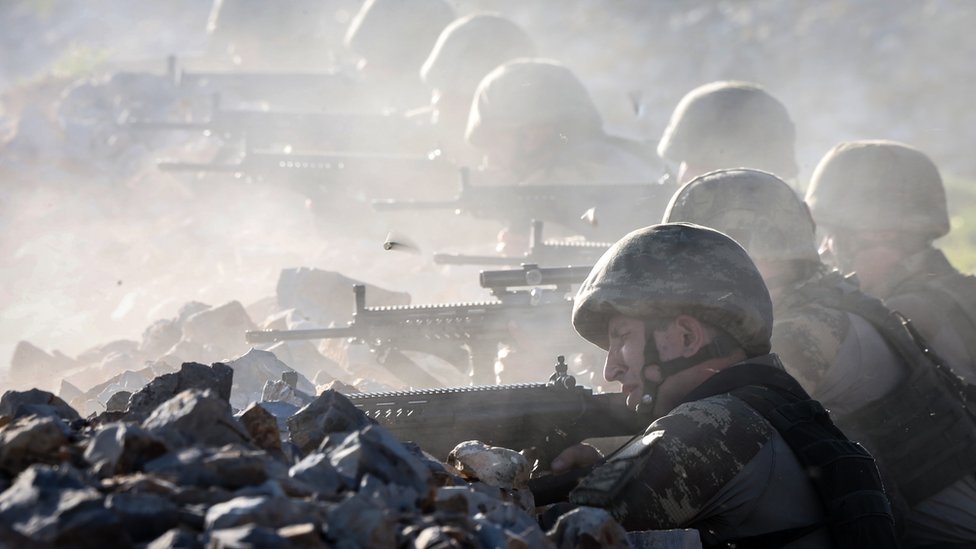 What is Turkey's Military Agenda in Northern Syria?

President Erdogan recently announced that Turkey’s next military operation against the YPG/PKK in northeastern Syria might be launched “within a few days,” which became the top high-level statement made in Ankara most recently. The details such as time, particular target place and duration of the military operation are not precise yet, but Turkey’s strategic objective is clear: to de-territorialize the YPG/PYD alongside its Syrian border, fix relations with the U.S. in Syria and recalibrate its military presence.

More importantly, since Turkey previously conducted military operations in Syria, policymakers realized that without any military action Turkey could not reach any of its strategic objectives in Syria. Therefore, eliminating the PKK presence alongside Turkey’s Syrian border and maintaining an army presence there might provide Ankara with an additional political maneuver to consolidate its political stance within the Syrian crisis. This, especially, will be the case when the international actors begin to shape the future of Syria.

Although Turkey has an obvious agenda and strategic objective in the Syrian crisis and towards the PKK/YPG presence in Syria; others, especially the U.S., hold different strategic calculations and concerns regarding Turkey’s next military move in northeastern Syria especially a comprehensive military operation against the U.S.-backed YPG group. The U.S. attempt to establish observation points in the eastern part of Euphrates was clearly a strong signal to discourage Turkey to launch a military operation against the YPG’s strongholds such as Ayn El-Arab, Tal Abyad, and Rasulayn.

Regarding the operational dimension of military intervention, it seems that Turkey’s military operation at this stage will not be comprehensive compared to the previous cross-border operations such as OES and OOB. Even though there are different operational scenarios in the hands of the Turkish Armed Forces, such as conducting a comprehensive and full-scale direct intervention including the infiltration of ground troops into northeastern Syria, Ankara’s first aim is to discourage the U.S. from continuing its observation points alongside Turkey’s Syrian border to protect the YPG. Ankara believes that it would be too late if the U.S. continues to establish observation points.

Ankara’s primary objective is to create a militarily protected safe zone which will be liberated from the terrorist entities and then open up a territorial zone not only to protect Turkey’s border against the terrorist infiltration but also to prevent the YPG’s territorial continuity in the eastern part of the Euphrates River. This will undoubtedly be a game changer for Turkey on the ground. The new operation, therefore, would focus on forming a region liberated from the YPG along the Syrian border and controlling critical points. The first signal coming from the ground is that Tal Abyad might be the initial target of Turkey.

Regarding relations between Turkey and the U.S., there are many strategic domains that both sides have to rethink through. If there is an agreement over Turkey’s military operation, then one side should certainly step back. President Erdogan said that the U.S. forces would not be the target of Turkey by underlying the potential cooperation between Ankara and Washington in the fight against the remaining element of Daesh. Erdogan strongly underlined that Turkey could take full-responsibility to fight against Daesh. More importantly, Turkey will certainly use its legitimate right of self-defense or intervention, as President Erdogan stated two days ago in Ankara. For Turkey, the YPG issue is not negotiable. Under this circumstance, Turkey, one way or another, will want to keep its eyes over the YPG and northeastern Syria until a political solution is reached across Syria.

Therefore, the most likely scenario for Turkey’s upcoming military operation is a limited intervention to clean the YPG presence by holding a small piece of territory to prevent the terrorist organization from consolidating its territorial and political order. If Turkey and the U.S. can find common ground to mitigate Turkey’s security concerns over the YPG, then the two countries might be able to establish a new modality to work in cooperation for Syria.

The viewpoints expressed by the authors do not necessarily reflect the opinions, viewpoints and editorial policies of Terrorism Analysis Platform.